Weber Grills ? The Delicious Evolution Of The Backyard Grill Barbecuing has been an American staple since the onset of America itself, although its roots go back much further. Basically from the moment fire was discovered and mankind grew tired of food born illnesses meat has been cooked. Smoking meat was a primitive way of keeping a freshly butchered animal from spoiling. The smoke kept the insects away and the heat allowed the meat to slowly cook extending its “best-if-used-by” date considerably. The Arawak people would build wooden structures to roast meat while burying pigs in fire pits was popular amongst Polynesian Islanders.

Fast-forward a couple of hundred years to the early 50’s.

“Grilling” is now a popular past time as the flat open brazier is the go-to choice for most grillers. Braziers date back centuries, millenniums in fact, and were predominantly used as a fire container for heating purposes and occasionally for cooking. Using this same basic design with charcoal as the heating source the meat is cooked atop a metal grate or grill.

As the legend goes a Weber Brothers Metal Works employee named George Stephen was a buoy welder by day and an outdoor grilling enthusiast by night. It was only natural then inspiration struck him one day while welding two buoy halves together. He used the same basic design as the brazier but created a lid to keep the heat in. After a few modifications such as a handle and a couple of holes poked in to allow the fire to breathe the first Barbecue Kettle was born.

George quickly found himself the most popular man in his Chicago neighborhood. So he naturally packed it up and hit the road to spread the good word. He and Webber paired up and soon his Barbecue Kettle replaced the brazier as the go-to choice amongst grillers and many variations of the grill followed.

Thirty years later, Weber once again revolutionized the industry with the release of the Genesis® gas grill. Instead of using lava rocks that were prone to flare-ups, it used angled metal bars to distribute heat and to protect the burners from drippings and reduce flare-ups.

Today, Weber continues to take grilling to new levels and is the industry leader in all things barbecue. With countless grilling accessories and a wide range of grills from gas, electric, smokers, and to yes George’s Barbecue Kettle charcoal grill, Weber promises to keep you happily grilling for years to come. 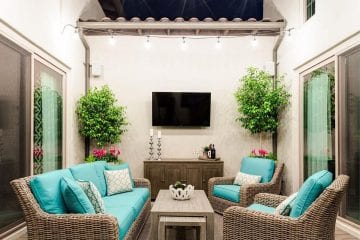 Small Outdoor Space? 3 Tips on How to Fit Your Patio Furniture 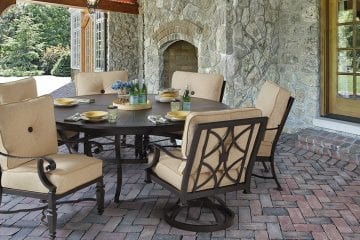 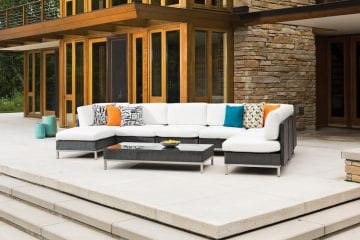 Are You Ready To Invest In High-End Patio Furniture?

No products in the cart.

Your wishlist is currently empty.